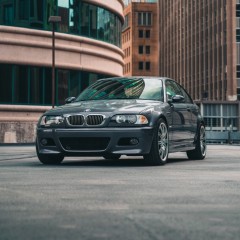 So jacked I nabbed this plate! "E46 M3" was taken, but this was up for grabs

Official start to my E46 M3 build thread! This is joining my garage along with my 2015 335i M Sport and my 2008 328i daily. Progress may be slow over the winter months, but progress is better than non

Replaced the tired original knob. Since I already had factory illumination I figured I can't remove that, so I went with an OEM ZHP illuminated 6 speed knob. Also, these things seem to be getting craz